Bayesian methods are usually shrouded in mystery, hidden behind pages of math that no practitioner has the patience to understand. Why should I even use this complicated black magic if other models are better? Also, since when is there a Bayesian version of simple linear regression? And while we’re at it, what in the world is MCMC and should I even care?

The goal of this post is to answer all these questions and to explain the intuition behind Bayesian thinking without using math. To do this, we’ll fit an ordinary linear regression and a Bayesian linear regression model to a practical problem. The post itself isn’t code-heavy, but rather provides little snippets for you to follow along. I’ve included the notebook with all the code here.

Does business freedom affect GDP the same for European and non-European nations?

This is the problem we want to answer. The data is taken from the Heritage Foundation and is as follows:

We’ll answer the problem by fitting a linear model to the data and comparing the regression coefficients for countries inside and outside Europe. If the coefficients are significantly different, that will tell us about the effect of business freedom on GDP.

To supplement the model, we’ll also add an interaction term between business_freedom and is_europe and call it business_freedom_x_region. Here’s what the data looks like for countries inside and outside Europe.

Below is the regression model we have for our data that is based on observations $(X, y)$ and parameters $(\beta, \sigma)$.

Ordinary linear regression takes equation (1) and finds optimal values for $(\beta, \sigma)$ by minimizing the distance between the estimated value of $y$, and the observed value of $y$. Below is an implementation of the model in Sklearn and a plot of the regression lines for European and non-European nations.

Although the slope for non-European countries is twice as large as European countries (0.046 VS 0.026), the absolute value of both numbers is small. Are these estimates really that different? Ideally we want a measure of confidence for each estimate, then we can be more sure that they are different. Keep this problem in mind for the next section and we’ll see how Bayesian regression solves it.

Remember that we’re interested in estimating values for $\beta$ so that we can plug them back into our model and interpret the regression slopes. Before we get to estimating, the Bayesian framework allows us to add anything we know about our parameters to the model. In this case we don’t know anything about $\beta$ which is fine, but we know that $\sigma$ can’t be less than 0 because it is a standard deviation. This step is referred to as prior specification.

Since we don’t know anything about $\beta$, we’ll use an uninformative prior (think flat probability distribution) of $N(0, 5)$. For $\sigma$ we’ll use $U(0, 10)$, which ensures only positive values. The choice of $10$ as the upper bound here is somewhat arbitrary, the rational is that $\sigma$ probably won’t be very high based on the values of our response variable, $y$.

Now we want to get the distribution $p(\beta | y, \sigma)$, which is proportional to the likelihood (2) multiplied by the priors. This is called the posterior formulation. In real world applications, the posterior distribution is usually intractable (cannot be written down). Here’s where MCMC and variational inference come into play with Bayesian methods - they are used to draw samples from intractable posterior distributions, so that we can learn about our parameters. At this point you may be wondering why are we concerned with a distribution when $\beta$ is a number (vector of numbers). Well, the distribution gives us more information about $\beta$, then we can find point estimates by finding the mean, median, mode, etc.

To write the Bayesian model in Python, we’ll use Pyro. I skip over small details in the code, however Pyro has amazing examples in their docs if you want to learn more.

For posterior inference, we use stochastic variational inference, which is a method used to approximate probability distributions. The code above initializes the stochastic variational inference sampler and runs it for $2500$ iterations. Now the Predictive class can be used to generate posterior samples for each parameter. We’ll only plot the posterior distributions for business_freedom and business_freedom_x_region as these are the most important. 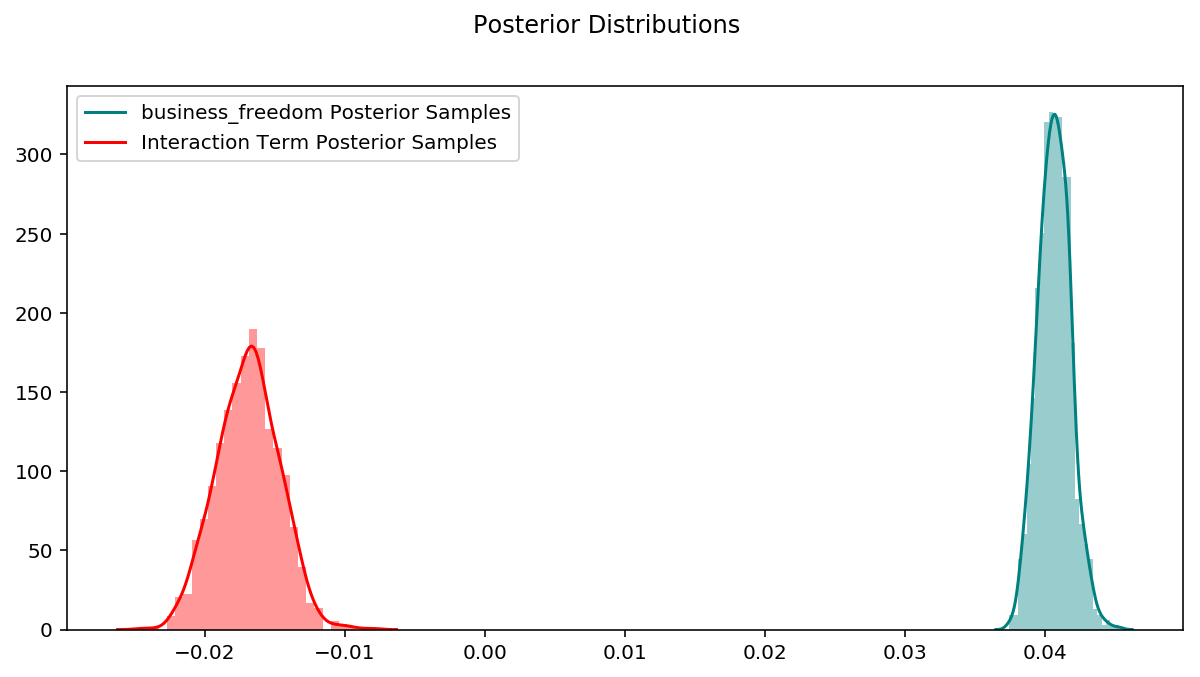 These estimates are different to the ones from Ordinary linear regression. This is because of the priors we used in the Bayesian model. Neither method is necessarily “more correct”. Actually, if we were to specify all flat priors and sample from the true posterior distribution, the parameter estimates would be the same. 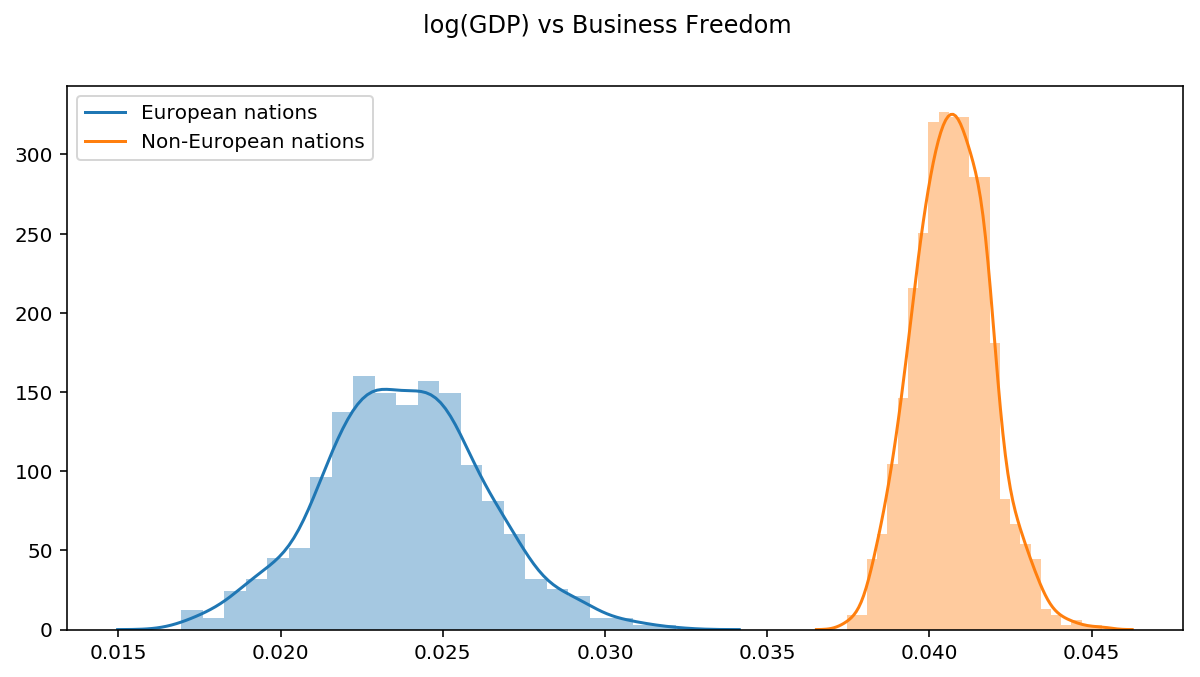 Although the absolute value of these slopes are small, we now have more confidence that the they are different becuase their distributions don’t overlap.

Returning to the questions we asked at the beginning of this post:

All the code for this blog post can be viewed here.