Notes on the Beta and Dirichlet Distributions

The Binomial distribution describes the number of successes in a binary task. It is parametized by the probability of success, $p$, and the number of times the task was completed, $n$. 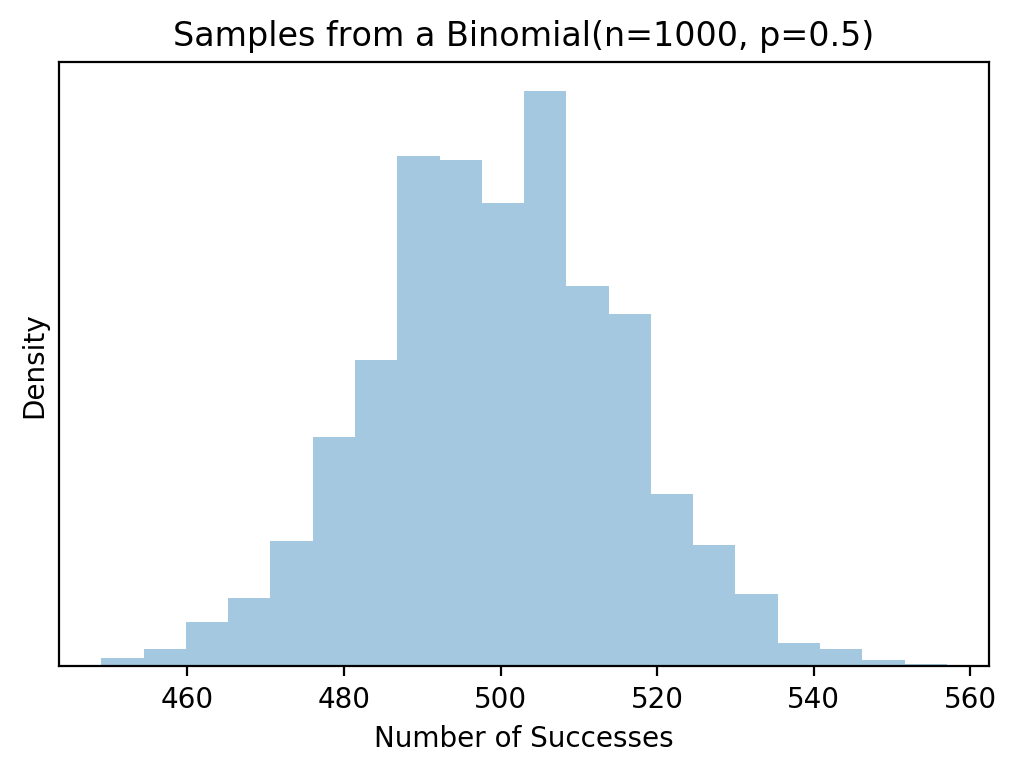 In a Bayesian setting, we’ll want to use the Binomial distribution as the likelihood for the favourite color problem mentioned above. This would mean placing a prior on $p$, which is a probability and needs to be between $[0, 1]$. It’s possible to use any probability density whose domain is $[0,1]$, however we prefer a distribution that would leave us with an analytic posterior. For a Binomial likelihood this is the Beta distribution, meaning Beta is a conjugate prior for the Binomial. 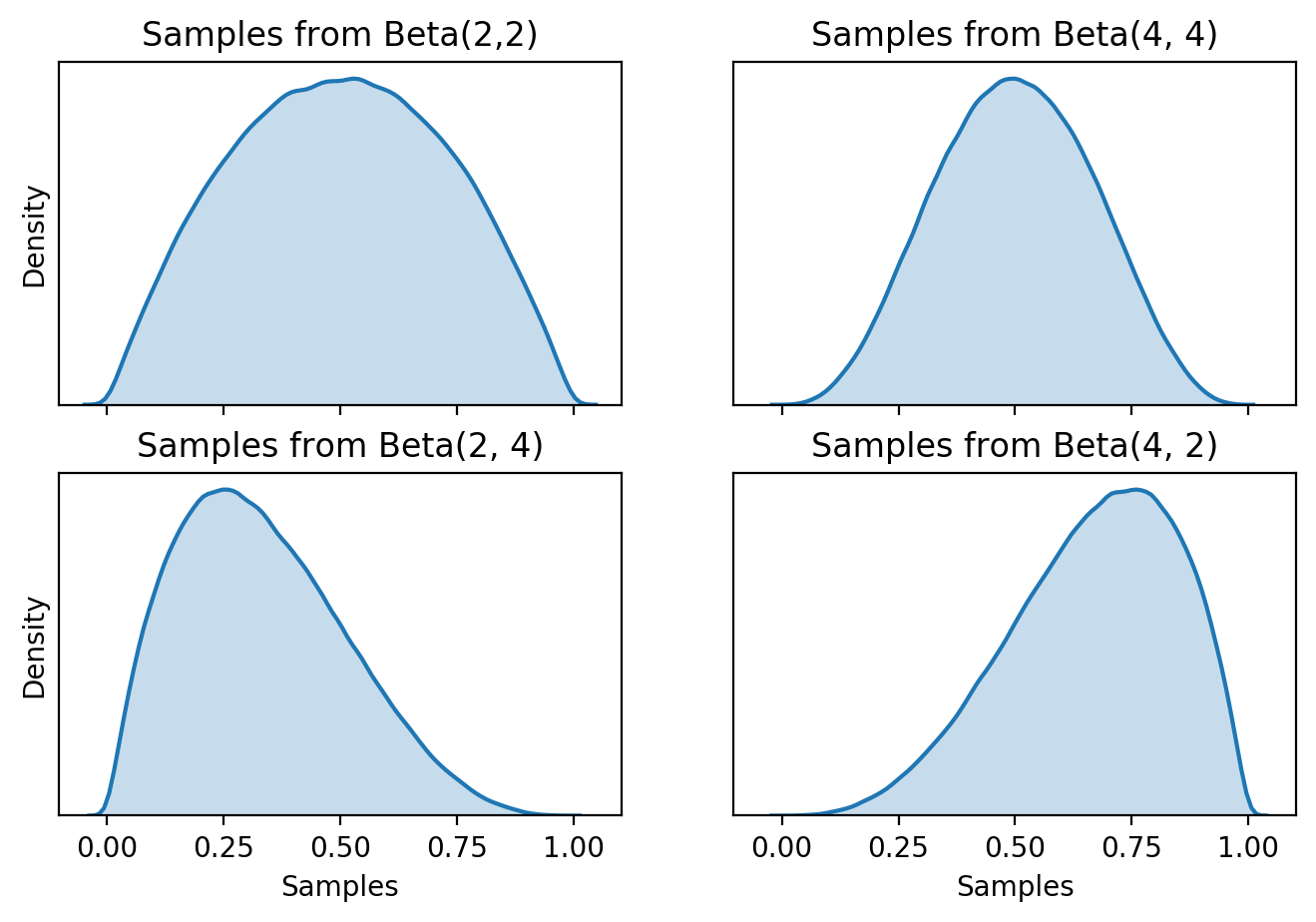 A limitation of the Binomial distribution is we only have 2 potential outcomes. The Multinormial distribution is a generalization of this, so we can have $k$ possible outcomes. It is parameterized by the number of trials, $n$ and the probability of success for each outcome $p_i$. Each sample from a Multinomial is a vector of length $k$, where each index corresponds to the number of successes for that outcome.

We used the Binomial distribution to find out if people’s favourite colour is blue, but this didn’t give us much information on what other colours people liked. Now we want more information. We’re interested in the distribution of people whose favourite colours are either: blue, green, red or yellow. If we ask $n$ people to choose their favourite color from one of these, the number of successes for each colour will follow a Multinomial distribution. Each parameter, $p_{blue}, p_{green}, p_{red}, p_{yellow}$ is the probability of that colour being a random person’s favourite. Sampling from this Multinomial will return a vector of length $4$ corresponding to the number of successes for that color. For each sample, the total number of successes sums to $n$. 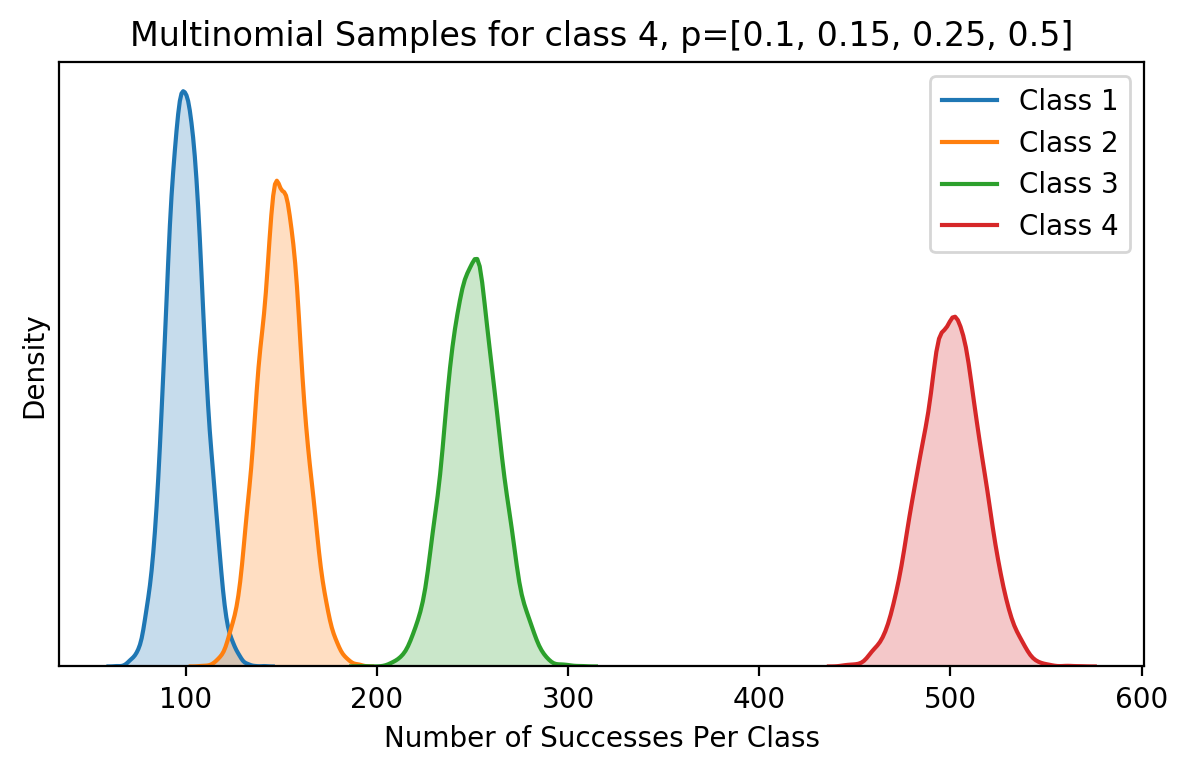 Similarly with the Beta and Binomial combo, we need a prior for each $p_i$ in the Multinomial likelihood. Unlike the Binomial, where we could potentially use any distribution with $(0, 1)$ domain as a prior for $p$, the Multinomial has an added restriction, as the vector of probabilities needs to sum to 1. Placing an arbitrary prior on each $p_i$ won’t ensure that $\sum p_i = 1$. This is what the Dirichlet distribution offers. It acts as a prior over the entire vector of probabilities, $p = [p_1, p_2, …, p_k]$. It is a generalization of the Beta distribution, and is also a conjugate prior for the Multinomial, which is an added benefit. 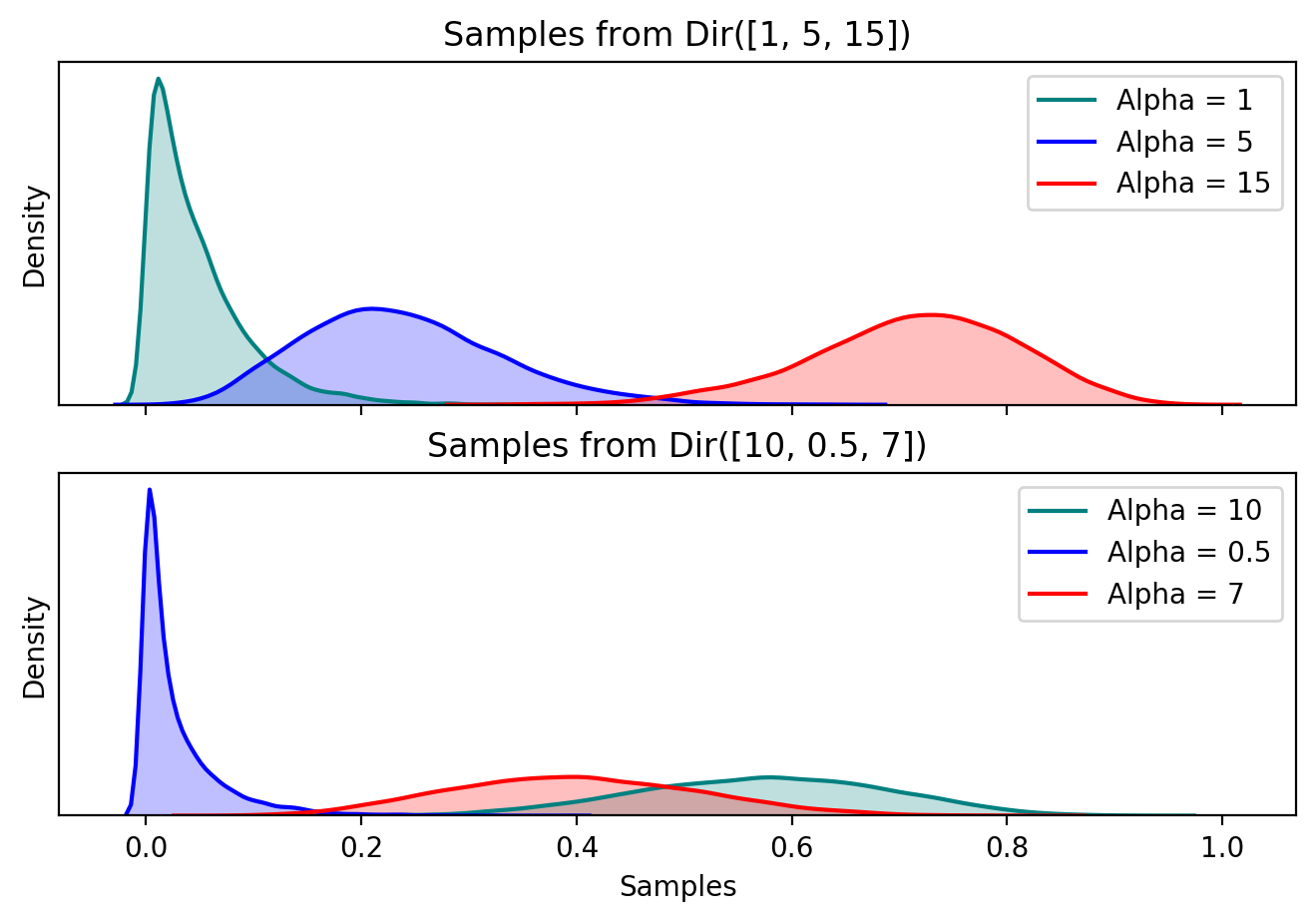 Two things are consistent: $\sum_{i=1}^{5} x_i = 1$ and len(x) = $5$. So we can imagine that each sample from a Dirichlet distribution is a literal stick of length 1, that is broken into $5$ sections. Each section (or class) has a length, for example section 2 in $x_1$ has length $0.15$. Each sample can have different lengths for each section. The Dirichlet distribution does is proposes different ways of breaking this stick into 5 pieces. Of course, there is a specific way of breaking the stick to generate samples from the Distribution, which is very aptly named the stick breaking construction.

The next logical step from here is to ask the question: why 5 pieces? What if we don’t know how many pieces we want? So really we want a distribution to propose breaking this stick in any way possible, 3 pieces, 100 pieces, 1e10 places. This can be done with a Dirichlet process.